Damazhon: Helper Spirits of the Shaman

Damazhon: Helper Spirits of the Shaman
Damazhon are Spirits that typically flit about around those places we recognize as being sacred: springs, caves, vortices and the like. A Damazhoni (singular form, Damazhon is plural) is viewed by eyes of Spirit as a glowing light, often blue or yellow or green. Its size is that of an LED light bulb. They are of the type of Spirit that has no conscious volitional will of their own, but they will readily receive the will, or command, of a person who has the capability of transferring that intent to the Damazhoni. In general, they are one of the classes of Nature Spirits. 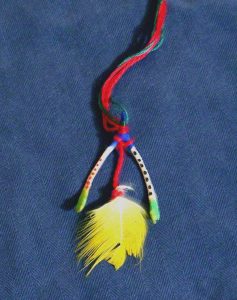 Due to the inherent nature of a Damazhoni to take on, and carry out, the directives of a capable person (typically a Shaman) they are much sought out as members of a Shaman’s retinue of helper Spirits. The most common manner of accruing Damazhon is to be in the place where they reside, and then catch them as one might a firefly. The particular manner of catching them requires of the Shaman to be both insightful and agile. Insightful, in order to be able to perceive the Spirits with the peripheral vision, and agile, as the method of catching them is to dance in an irrthymic manner, spinning and stepping in nonlinear movement. The Shaman will have in hand a Spirit Catcher. This is a hoop of bent willow, about 8 inches in diameter. Laced into the frame of the hoop is a spider web pattern woven of sinew, hair or twisted fibers. This device, when empowered and activated, will snare a Damazhoni when the Spirit Catcher comes into contact with it. The collected Damazhon are then taken home and stored in a suitable article such as an arrow or a small vessel. These items are first filled with Power (Life Force) so that the Spirits are able to sustain their life and vitality.

Occasionally a Shaman will come by Damazhon by other means. As the Damazhon Spirits are neutral in essence, they will take on, as I have mentioned, the directive given it by a capable person. Sometimes that capable person is, nonetheless, of ill intent. Such persons, Sorcerers who hire out there services to impose the will of one person upon another, will often command the Damazhoni to carry forth an act of illness or even death upon the intended victim. The Damazhon will them, based upon the command, attack the unfortunate victim, eating holes in the person’s aura, causing leakage, worm their way into a person and cause debilitation to the organs and emotions, leading to calamity and discord in that person’s life. When this has been the case, and the person being attacked goes to a Shaman, asking for assistance, the Shaman will then send out his or her own Damazhon to intercept the Damazhon sent by the hired attacker. The Shaman captures the Damazhon sent by the attacker, decommissions them of the destructive commands, and joins them to the Shaman’s own community of Damazhon.

Other than the situation described above, that of a Sorcerer commanding Damazhon for ill intent, I will continue sharing this knowledge as it occurs in a more typically positive manner. Speaking openly about this topic, while still withholding enough so that persons of ill repute will not be able to apply this knowledge for bad purpose, while those of sincere integrity may be inspired to learn more in an appropriate setting, I open this door of knowledge.

A Shaman’s interaction with the Damazhon is one of respect and relationship, rather than possessiveness or domination. The Damazhon in a Shaman’s care are fed, kept empowered, let to fly free. There is a natural relationship between humans and all other beings of the natural world. We are not separate and distinct from those around us; we are an integral part of this world just as are the animals, plants, mountains and Spirits. In the recognition of this innate relationship we call upon the forces of Creation in support of our tasks, just as we offer our prayers and consciousness in support of the needs of the world and its creatures. Loving honor is the place from which we interact with the Damazhon, in appreciation that they are available for our utilization, just as much as it is right and proper for us to utilize corn for food, water to drink and air to breathe.

The Damazhon are engaged for the benefit of all Beings. Foundational is the acceptance that what is right and beautiful for one Spirit is always right and beautiful for every other Spirit, for ultimately we are but One Spirit. The directives given, then, are those that will bring benefit to the person in their forward progressing spiritual journey. A Damazhoni might be transferred to the care of a recipient when that person has need of foresight. A person traveling upon the highways may request a Damazhoni to bring awareness of road dangers ahead. Others may require the extra edge that a Damazhoni can give to warn the individual of ill intent approaching. Not all uses of a Damazhoni are for warning of dangers, however. We can engage these Spirits to fly ahead of us in time, to inform us of what lays upon our path so that we can best prepare ourselves. And we can set the Damazhoni to fly in quest of information that lies upon the psychic landscape to aid us in finding lost objects or persons. A Damazhoni can be set forth to locate the growing place of herbs we may need for healings. At other times we might give the directive to a Damazhoni to find bits of information we need to complete an integrative contemplation of a knowledge set. There are a myriad of opportunities that will expand our capabilities and effectiveness in life when we engage the services of these Spirits of the sacred places.

The Damazhon, in order to be present for us in relationship, require a body. They also need to be fed, or empowered. And, they must have their freedom to roam, as well as to scout for us. As Shamans we meet these needs by creating for the Damazhon a home. The most common form of this is the wishbone of a bird. The bone is removed, whole and unbroken, then thoroughly cleaned and set aside to dry out. The wishbone is then painted with specific colors, depending on the intentioned use of the ‘mojo’ (Spirit endowed power object). Often the two arms of the wishbone are painted white, for purity of thought and intent. The top tip, where the two arms conjoin, is painted in the color that focuses the specific attribute of Spirit being called upon: purple for visioning, yellow for clarity, green for healing powers or red for health and vitality. The two bottom tips, of each arm, are also painted in the color that denotes the quality one wished to ground into the person. Various designs might also then be painted upon the tips or arms to further specify the type of action or essence to be brought to bear by the Damazhoni on behalf of the recipient. These colors and designs act as the commands that give a direction to the Damazhoni. It will only be able to act in accord with the color coded commands, and cannot be made to do something outside those commands. Each mojo contains only one Damazhoni and each Damazhoni is enabled to carry out only a very limited set of commands. For example, a single Damazhoni cannot be set forth to protect the wearer of the mojo and simultaneously act as a courier of information between two peoples. Each task requires a separate mojo. In addition to the painting of the bone, a red string is tied upon a feather of the bird appropriate to the task assigned the Damazhoni. The feather is then tied by the red string to the wishbone, leaving a long strand by which the mojo can be affixed to a necklace, rearview mirror of a car, or hung upon a thumbtack above one’s bed. The red string denotes the path of Life. The feather allows the Damazhoni to take flight, that it has freedom as well as the ability to fly out in search of knowledge. A more highly defined command to the Spirit can cause it to actually intercept and ‘eat’ the dangerous forces that may be being sent as an attack against the wearer. In this situation the Damazhoni, ever vigilant, circles about the wearer, ready to intercept anything untoward that may be seeking to transgress upon the intended wearer of the mojo.

Care, feeding and exercise of a Damazhoni is an important aspect of relationship with these Spirits. An altar is made, or a place made upon one’s altar, to house the Damazhoni inhabited wishbone. The bone might be hung above the altar, the bottom tips almost touching the surface of the altar below, or set directly upon the altar cloth covered shelf or tabletop. A small pile (about a thimbleful) of blue corn meal is set in front of the Damazhoni, and a bottle cap or small dish of pure spring water is placed between the arms of the wishbone. These are placed upon the altar so as to feed and water the Spirit. Frequent replenishment is often required, especially if the Damazhoni is doing a lot of work. It is not unusual to find that the pile of blue corn meal, or the water, disappears overnight or in the matter of a few days. And yes, you can check for a mouse, but that is only the rational mind seeking an explanation that will not require it to accept the magical. At times, again when the Damazhoni is in the midst of working, you will find the bone flipping over of its own accord, or even flipping back and forth before your eyes. These are sure indicators that the Spirit is doing its job.

If proper care is not given the mojo, the Damazhoni will leave the bone and return to the Shaman who was its previous caretaker, rather like a child going home. Not taking care of the Damazhoni might look like forgetting to feed and water it, not speaking with it in a loving manner, nor giving appreciation for its help and gifts. Should a recipient of a Damazhoni mojo seek to push the Spirit beyond its directive, or if the person tries to make the Damazhoni do something unintegruous, the Damazhoni will immediately return home (I set hidden commands to the Damazhoni to insure right use). Often the bone will break as a consequence.

The caretakership of a Damazhoni is considered to be an honor and responsibility. As with all relationships with Spirits, we must tend the object within which it resides with the greatest care, insuring that it is kept safe from damage and kept from indiscriminate handling by other people. A proper relationship with a Damazhoni will deepen over time as familiarity grows between Spirit and person, the bounds of mutual responsibility are explored and honored, and the needs of both are fulfilled. It is a relationship that can last a lifetime; a time filled with appreciation and gladness of heart.