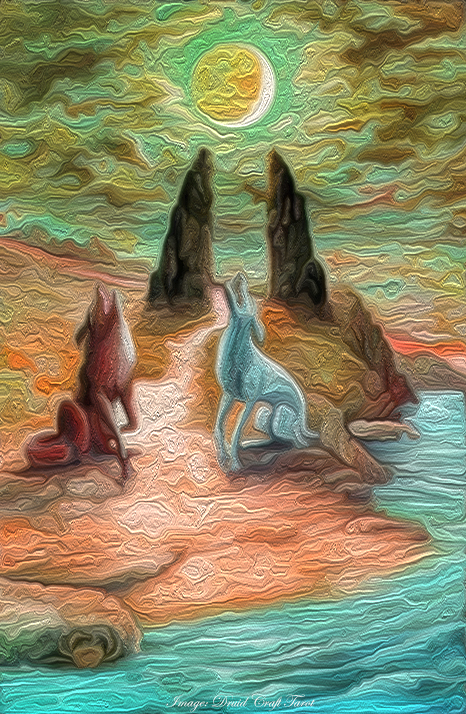 With Drum in hand, a steady tapping creates resonant tones that open a portal into the Underworld, the Dream Realm of the Soul. My Spirit slips betwixt and between the irrhythmically slamming rocks that are the Gates of the Underworld. It is in this deep, twilit land that the Soul of Dog dwells while its emerging consciousness is growing during its association with its Human in the Realm of Consciousness called Life on Earth. My quest for the Lost Soul of Dog begins here, in these lands of Shade and Myth.

Myth is the reality of the Soul, just as History is the reality of the mundane world. The Mythos, then, is the topography, the terrain, the cosmology, and the context of the Soul’s experiences that together create and formulate the inherent nature of the Underworld. Everything that is perceived and experienced in the Underworld – or Dream – Realm is comprised of symbol and significance. This is no less true for Dog (who has woven their awareness into Consciousness by its association in relationship with a person) than it is for Human.

The Underworld is where Consciousness stores its memories and their associated emotional impact. These experiences are stored as characters and scenarios that are highly symbolic in nature. Memories, and their emotional content, of kindness and compassion – whether they be actions done or whether we are the recipient of – might be perceived as fields of aromatic and beautiful flowers. Fears might show themselves as Monsters in this Dream Realm. Abusers may be encountered as savaging beasts, hateful and rageful, whereas our memories and emotional associations of Teachers and Helpers may be encountered as Beings of Light or the nurturing care of a Mother Bear. Frightening situations of our mundane life may be played out as cliffs with sheer drop-offs, or a desert full of cactus that stands between us and our destination. Our moments of courage and success may be experienced in this Dream Realm as the appearance of a Stag that guides us through that desert of thorns, or a pool of sweet spring water appearing as we walk this twilit land.

When a dog, one of our beloved partners in this life, has experienced trauma, injury, grief, or loss, the emotional weight may be so intense that it is greater than what Consciousness can itself carry. In such situations, the Soul (which carries the emotional content) is drawn down into the Underworld in order to relieve, or disconnect, the body from the brunt of the suffering. In common parlance, this is referred to as going into shock. Once the Soul of Dog has been drawn into the Underworld the Dog’s Consciousness, now having come into presence due to its association with its Human, is cognizant of the events and scenarios that it begins to experience. But, let me remind you, these are highly symbolic, and mythic, in nature. So if the dog in question had been abused, the Dog Soul relives that abuse in symbolic form, perhaps as being snared, captured, chained, tormented and tortured by a ghastly beast. As the Underworld/Dream Realm is non-linear, all composite experiences and symbols are simultaneously available to Dog Soul to draw upon and utilize. Dog Soul might, then, call upon courage in the form of the Stag who will guide Dog Soul out of the place of torment. Or maybe it is the remembrance of the field of beautiful flowers – that is, the kindness the dog has experienced in its mundane life – that instills Dog Soul with hope, knowing all is not torment. It may be, therefore, that over a bit of time the Dog Soul is able to integrate enough beauty and hope to find its way out of the Underworld and back into the Earth Realm of the mundane, whole, and healed. comprised of symbol and significance.

Not always does our loved one, our dog companion, heal from traumatic injuries and events. In those cases it is recognized that the Soul of Dog has become stuck, or even lost, in the Underworld Realm. It may even be that the ghastly beasts of torment have chased the Dog Soul into dangerous terrain where it is cornered and there is no way out.

When a Dog Soul believes itself to have failed at its mission, that of serving and protecting its person, it experiences shame and guilt. This is exemplified as abreactive behaviors. Running away or hiding, obsessive self-gnawing, self-pawing, and flank sucking, refusal to eat, inappropriate peeing, anxiety and nervousness, aggressiveness, lunging, and biting, lethargy and depression, excessive and inappropriate barking, whining, skulking, timidity, and a host of other out of character behaviors can be indicative of the dog’s inability to handle its own failure of purpose.

These guilt and shame-driven behaviors are experienced in the realm of the Dog Soul as encounters with frightful and overpowering ghastly beasts. They might show themselves as overly large animals that pose a threat, such as cats, snakes, swarms of bees, gangs of delinquent humans, or dive-bombing birds. These self-recriminations of Dog might also appear as overwhelming conditions of Nature. The Dog might find itself caught in a rampaging flood, torrential downpours of rain, being caught in the open with over-amplified thunder and lightning, lost and wandering in extremely hot environs, or any number of such exaggerated conditions of Nature. It is in these situations that a Dog Soul Retrieval is called for.

Having initiated my journey through playing rhythmic beats of the Drum, and having entered the Mythos of Dog, my quest begins in earnest. There is a thread that connects the Underworld Soul of Dog to its body. It appears to me as blue in color. I follow this thread from the Earth/Consciousness Realm into the Underworld/Dream Realm. Taking note of the elements of Dream that I encounter gives me a good sense of what the context of the Dog Soul’s environs are in which it is currently dwelling. As this is not my own Dream Realm, I can observe without being affected or causing an unwanted effect. Sun-scorched sands that would blister the feet of the Dog (symbolic, perhaps, of being commanded to do something against its will, such as attack another dog) I am able to move through without injury. Seeing where a Monster (the Dog’s fears) may be hiding gives me a heads up as to what the Dog may have encountered as it passed this way, though I myself am unaffected, as they are not my fears. This is, by-the-way, why it is never recommended that a Dog’s person attempt to perform a Dog Soul Retrieval, as the fears and anxieties of a person and their dog are often too closely wedded, and the Dog’s person could very easily be adversely affected by the mythic embodiments found in the Dog’s Underworld Realm. The person themselves could even become lost in the process and themself require a Soul Retrieval.

Tracking the Dog Soul to where it currently resides in the Underworld is just the first step. It is necessary to discern the nature of what has entrapped the Dog Soul. Again, these might be the Monsters of fear, abuse, having been terrorized, starved, or left outside to freeze. All of these brutal experiences would be experienced as symbolic figures of torment in the Underworld/Dream domain of symbolic expression. In addition, having paid attention to the life-positive embodiments of the Dog Soul’s rich environment of emotionally manifested experiences, such as Happiness (perhaps embodying as a child playing ball with the Dog), or Trust (maybe showing up in the Dream as the reliable and firm presence of a Trainer giving commands of safety), etc, I am aware of which characters and scenarios to call upon to help the Dog Soul return to confidence and courage.

When doing a Dog Soul Retrieval the inherent conflict that has caused the disconnection registers within the Soul of the Dog, and is exhibited as symbolic situations and characters within the Soul Realm of the Dog. This is where the trauma must be resolved, in the Soul. If the trauma is addressed only from a physical or emotional level, it is helpful but incomplete, and there will always be residual trauma remaining as disruptions in the dog’s behaviors. The only way in which Soul trauma can be resolved is through a reconfiguration of the Mythos of the Dog, in essence, a re-dreaming of the Dog’s Soul Realm. This is both the task and the area of expertise of the Shaman. The integration of the Dog’s life-positive emotionally embedded experiences, played out as characters and scenarios in the Dog Mythos, with the trauma-based conflicts brings forth a re-framing of the trauma, where Courage replaces Fear, and Confidence replaces Insecurity (these are but examples). The result is freedom from entrapment by the ghastly monsters and dangerous landscapes that have kept the Dog Soul in isolation and unable to reintegrate.

When thusly the Dog Soul is freed of its internal trauma/conflict, the wounds of its Soul healed, the Dog Soul is then ready to return to full embodiment as a Conscious Being. This calls for the return of the Dog Soul to its body, mind, and emotions. As the Shaman affecting a Dog Soul Retrieval, my task is to bring the Dog Soul back into the Earthly Realm of Consciousness. However, it is not usually for me to insert the Dog Soul back into its body (there are exceptions, of course). This is best accomplished by having the Dog’s person call the Dog Soul home. It is that call and bridge of love that best and most naturally brings forth the willful desire of the Dog’s Soul to re-embody, as the Dog knows that its person will provide security, safety, trust, and love.

To request that a Dog Soul Retrieval be done on behalf of your dog companion, please go here: