“Grampa, I pray that I am worthy of the Caretakership of ‘the Ways’ that you have placed in my trust.” ~Jade Wah’oo Grigori 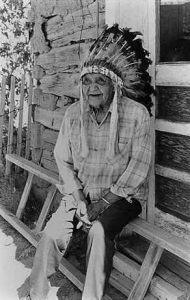 In 1974 I was living the life of a nomadic Hunter-Gatherer in the Rocky Mountains of Colorado. As late Autumn approached we, my Companion and her daughter, and a few other a-horseback fellow travelers, began looking for a place to establish our Winter Camp.
We had the fortune of meeting a woman, Lu Ann, with whom we had an aquaintance in common. Lu Ann’s land just happened to sit in the midst of the Southern Ute Reservation in extreme Southern Colorado. She offered us the Winter’s use of her 40 acres to set up our Camp and pasture our horses in exchange for the repair of her fences around the acreage.

This done, I began hunting in the area, going up on the mesa to the West, into Rinconada Canon a few miles North of our Camp, and exploring the mesa set to the East, looking for sign of deer and elk throughout this semi-arid desert land covered with pinon-juniper trees and, higher up on the mesas, ponderosa pine.

Wanting to gain a full picture of the local game herds and their movement through their terrain required that I also investigate the San Juan River bosque’ to the South of, and over a ridge from, our Camp.
As one does when hunting, I was up way before the first glimmer of dawn. Stepping outside of my tipi into the early morning’s darkness, my prayers with the Earth Mother expressed, and permission asked to receive one of her children, a deer perhaps, I set forth to climb the ridge and head into the belt of cottonwood trees and riverside meadows which comprise the bosque’. Upon my arrival on top of the ridge I began to survey the river bottom below me in the false dawn’s emerging light. There at the foot of the ridge on the river side sat a cabin with the smoke of a freshly laid fire rolling forth from the chimney. As is the protocol when one lives in a sparsely populated area, I went down the hill to the cabin to introduce myself and let whomever lived therein know that I was living in the area.
By now the day was in full dawn. I knocked at the door. There was the sound of someone shuffing around inside. After a few minutes the heavily weathered wooden door opened a wide crack. An old man peered out at me. He said nothing, so I explained to him that I had been out hunting, had seen the smoke of his fire and had come to let him know that I was living for the Winter, with my family, over the hill from him. Still the old man said nothing. Seeing that he was indeed an old, old man, I then asked him if there was anything I could do to help him out….bring him some water from the river? chop some firewood for him?
With that offer, the old man smiled, a quirky little smile and a blue-white silvery light shot from his eyes. Now, I grew up in a family environment where we interacted with Spirits, and so I was no stranger to the strange. This old man pointed out to the east side of his house and said “You see that wood pile over there? You go chop it for me.” Well, I had asked! I split the juniper logs lengthwise and then chopped them into length. Occasionally, when I stacked armloads of the firewood under the overhang of his porch, there would be a glass of water sitting there for me. As the day turned into afternoon I finished breakiong down the stack of wood.

The very last armload I carried through the wooden door through a pantry/mud room and on into the kitchen of the two room cabin. I set the firewood into a box on the left side of a wood-fired cookstove. The old man motioned, right hand pulled into a fist, thumb pointing up, slapping the bottom of his fist upon the palm up and open left hand and then pointed to a chair by his kitchen table.

This hand sign I knew to be the universal Indian hand-sign language for “Sit down.” I sat.