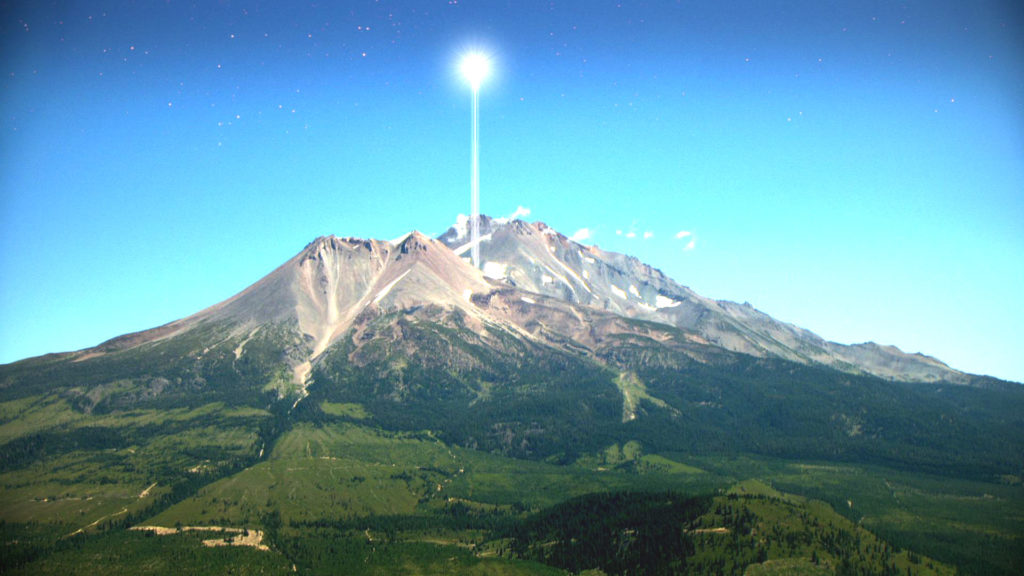 Kneeling upon the earth within the tall pine-forested slopes of Mt. Shasta I placed my Eagle Staff into the loamy soil and sang a song of honor to Tengiri, the Spirit of the Mountain. In the midst of the third verse of four, a vibration began moving up from the Earth beneath me, welling up within my every cell, sweeping aside remainders of thought and time.
She has come! Rushing, swooping, swirling Awareness awoken!
“I forgive you.” Her words-beyond-words melt me into tears. I fall to the ground, collapsed in the release She has given me. I know precisely of what She speaks. 13 years before, during a time of drug-numbed stupor, I had come upon the Mountain and then, as now, had placed Staff to Earth. The Staff instantly split apart, slicing a deep gash into my palm. In shame had I left the Mountain. I knew, after all those years of walking life’s ragged road to a more peaceful and calmer place of sobriety, that She had, in this bright new moment, forgiven me of my past transgression!
“O! Tengiri!” I cried in gratitude for the forgiveness of that which had been put away but never far forgotten. “What may I do for you in appreciation?”
“Pilgrimage.” She replied simply. “Bring others to me that I might afford them my embrace.”
Later that evening I sat outside my cottage admiring the glint of the moon off the glacial cap of the mountain’s peak. Being in the wake of a difficult family shattering divorce my thoughts often returned to recrimination, my guts to grief. And yet…I noticed in this moment of reflection as vivid as the moon’s shine from the peak above me that I had not gone into these wounds, had not, in fact, indulged them all day. Curious, I contemplated my circumstances of pain and found them wanting of any fever at all! Throughout the whole of the next day, I noticed the ‘goneness’ of the suffering. Intrigued I delved even deeper, seeking to self stimulate the emotionally charged memories of long past injuries, traumas, and judgments. Nothing. Gone. I was amazed. Only now did I begin to grasp the implications of forgiveness that the Tengiri, the Spirit of Mount Shasta, in Her absolution, had released me from ALL my sufferings-in-transgression!
Since that moment in July of 1996, I have lived in my Joy. The self-loathing and harsh judgments of others, born of my own shame, guilt, and injury come from a lifetime of stumbling, has never returned. I am free. When, now, someone asks of me “Jade, are you happy?” I have found that I must respond “Happy? Miserable? It is irrelevant. I am in my Joy!” With their incredulous looks, I add “I certainly would rather be happy than miserable, but really, as long as I am in my Joy I find happiness and misery to be mere transitory feelings.”

NOTE: I wrote the above piece following the experience of release upon Mt. Shasta, an event that occurred many, many years ago. To this day I still am living in my Joy.