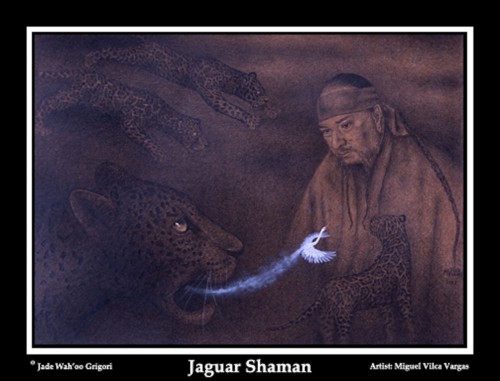 If it is the Underworld Soul that is disconnected or missing the symptoms are very distinct from that of a person’s experience of their Earth Soul being gone. As the Underworld Soul is the point of attention from which we dream, the person has dream difficulty. This difficulty may be an inability to recall dreams, or having no dreams at all. Dreams may be disturbing, dreams of being chased, imprisoned, tortured, lost and adrift, unable to find one’s way back home. As the Underworld Soul is the storehouse of our Power, when that Soul is out of sync we no longer have easy access to the life force stored there. (This is rather like having money in your bank account, but you have lost your ATM card and can no longer readily withdraw what you need to survive.) As a result we are lacking in energy to accomplish life’s daily tasks, can’t seem to get the passion fired up, living in a state of malaise. Neither do we have the life force charge to maintain our health; we become susceptible to colds, the flu, infections and the like. It is this life force field that resonates with emotive thoughts, feelings, experiences and impressions: the stuff of memories. When the Underworld Soul is in a state of disconnect we suffer from long-term memory loss. Specific chunks of our past may be blank or hazy when we consider them.

Retrieval of the Underworld Soul

Retrieval of the Underworld Soul brings with it its own unique set of variables. When the Underworld Soul is slammed out of sync, again through trauma, abuse, loss of consciousness, the death of a close and loved companion or family member, or anything which will thrust one into a state of shock, it departs into the realm of Dream. The Dream World’s essence is that of symbol, myth and correlative significance. When we are dreaming everything that transpires is quite real to us. It is only upon awakening that we, sometimes with a swipe of the brow and a sigh of relief, are able to declare that ‘it was just a dream’. Whilst in the dream, there is no such escapism. In the Dream World everything we have engendered in life is met in its symbolic manifestation. Fears show up as monsters, guilts as demons. The love we have brought into existence appears as angelic beings of protection and beauty. Make no mistake about it, these beings are real. They cannot be brushed off as fantasy figures. A ‘demon’ or ‘advocate’ is a personal symbolic construct and is fully responsive to, and created by, our own state of being. And there are fully autonomous Beings in the Dream World that are not of our personal symbolic construct. They exist as manifestations of the collective human consciousness. A ‘Demon’ or ‘Advocate’ is an autonomous Being of which we have very little or no control through the restructuring of our personal psyche.

During an Underworld Soul Retrieval the Soul Retriever will locate the lost Soul. Then, depending on where the Soul is, what it is undergoing and in which realm of the Underworld it is found to be, appropriate action is taken on behalf of the person to engage their Dream Soul and embrace it so as to safely bring it back home to its natural residing place.

Often the Soul is just wandering, adrift in fantasies, asleep. Sometimes the Soul is awake and adrift, often scared because it knows that it is disconnected and can’t find its way home. In these situations the Soul Retriever simply embraces in loving care the Soul and brings it on home.

There are those Beings, Advocates, that keep a look out for lost Souls. They will take in and care for these Souls, rather like an orphanage. If this be the situation the Soul Retriever must present their credentials (as the one who’s Soul is lost, as Shaman, or Psychopomp) as well as the authority to be there on behalf of the person, if it is other than one’s self. The authority I refer to is permission given directly by the party asking for help. When credentials and authority are presented the Advocates will release the care of the Soul to the Soul Retriever. The Soul is then returned safely home to its rightful place of relationship with the Body/Mind and other Souls.

There are also those entities, Demons, who keep an eye out for lost Souls. They will track down, hunt, snare, imprison and torture the Souls they capture. This torment is experienced in the person’s life as emotional flare-ups and disability, outbursts of unknown sourced rage followed by deep depressions, constant misfortune and turmoil. Those usurpers then feed upon the emotional turmoil that is generated by the torment of the person’s Soul. They are the vampires, not of fang and claw, but of emotion and Soul Force. When the Soul is found to be ensnared the Soul Retriever must then present credentials and authority. Most often the Demons will immediately release the Soul and back off. Sometimes, however, a Demon who has fed upon the Soul Force of many, many unfortunate Souls and has become bloated with Power, and arrogant, refuses to release the captured Soul. In that situation the Soul Retriever must be able, capable and willing to be as a Warrior on behalf of the ensnared Soul, doing whatever it takes to secure the freedom of that Soul.