Winter Solstice: A Time of the Shaman’s Gift Bringing

Winter Solstice: A Time of the Shaman’s Gift Bringing 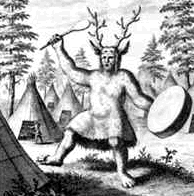 Ancient Origins of the Season’s Icons

Winter Solstice is the shortest day of the year, the longest night. In the northern hemisphere this occurs December 20, 21, 22 or even the 23rd, varying from year to year, dependent upon the elliptical path of the Earth around our Sun. Throughout the cultures of the northern world the Winter Solstice is recognized as a powerful time, a time that commands the respect of acknowledgment and celebration. Christmas is, of course, one such holiday. Yule and Saturnalia provide historic origins for the motifs integrated in the celebration of the season in the form of the Yule Log and decking the halls with boughs of holly, feasting and family gatherings. Mithraic rites of the birth of the Year-God recognize December 25th as the holy day of renewal. It is also the birthday of Osiris, Dionysus and Horus. There is nothing new, or particularly Christian, in the celebration of Christmas and other similar celebrations at or near the Winter Solstice in the northern hemisphere. The roots of this seasonal celebration run deep in antiquity, emanating from the Shamanic rites of the Neolithic era.

The underlying aspects of the various cultural Winter Solstice celebrations lies rooted deep in Shamanic origins. Amongst the Saami (Laplanders) and Siberians, Buryats and Altaic tribes, all of the far northern climes, there was and is a very common motif in the Shamanic practices surrounding the Winter Solstice ceremonies. There, the people would present the Shaman with gifts of value, according to the nature of each their own culture to officiate the request, be it food, furs or firewood, coin, caregiving or copper.

A Sacred Tree, or Pole of Ascension, the Axis Mundi, was erected in the center of the Shaman’s house or in the common house. This officiated the Shaman being called upon by the people to undergo a Shaman’s Little-Death. In this Little-Death the Shaman moves into an intentional near death experience, enabling the Shaman’s Spirit to go free of the body and then to travel into the realms and domains accessible to one in that state. Utilizing the means available, dependent upon the cultural methodology, the Shaman would enter into a deep trance that would allow his/her spirit to fly free. Amongst the northern Asiatic peoples I have mentioned, the method of slipping into the catatonic state of a Shaman’s Death was to eat the potent entheogenic mushroom we know as Amanita muscaria. The Amanita is bright red with white spots covering its flesh (like Santa Claus’ suit). Both the Shaman and the reindeer of these nomadic herders partake of this mushroom. The strong psychotropic effect the mushroom has upon the Shaman enables the Shaman’s spirit to be loosed from his/her body. Shamanic drumming is another method of achieving the prerequisite state of altered consciousness that allows the Shaman to ascend in spiritual ecstasy, or Spirit Flight. The motif of Santa Claus riding the magic sleigh pulled by his flying reindeer is borne from this ancient rite. The Shaman is then able to follow the Spirit Path, represented by the Sacred Tree, that guides him/her to the North Star and from there into the Cosmic Realms.

The Journey Out of Darkness

The purpose of having the Shaman undertake this journey was many fold. A basic understanding of some mytho-cosmology will be helpful. At the time of the Winter Solstice the days have descended into the depths of darkness. It is at this moment, however, that the Sun begins to return, and with it, the days begin to lengthen. As the days become longer more light radiates into the world. This natural rhythm of the dance of Earth and Sun is a trigger within our psyche. As all the things that have remained hidden in the darkness begin to be revealed in the greater light of day, so do all the things that we tend to hide in our own Inner Darkness begin to be brought forth into activity as the days lengthen, just as seeds left in the darkness beneath the soil begin to sprout and grow in response to the emerging light. Generations upon generations of experiencing this cycle of our own Soul’s dynamic led the people of ancient cultures to utilize the very same patterns of nature to deal effectively with their burdens of pain and suffering, of anguish and trauma that had laid hidden within the Inner Darkness of their own Soul.

A Time of Forgiveness of Debts

One of the greatest burdens we carry with us is the unconscious begrudging of having been wronged or a debt owed us that has been unpaid. To forgive the grudges of having been slighted, to forgive the debts owed us, brings a liberation out of suffering and into ease. Therefore, at this time of the New Year, as measured by the return of the Sun and light into our lives, a chance to start afresh is symbolically relevant. This opportunity was availed by our ancestors, and still is amongst those of us who continue with the wisdom of the ancestors, through Winter Solstice Ceremonies to release the burdens of the year past, that we may step into the new year free of the burdensomeness of clinging to how we want things to have been, rather than accepting how things are.

Another value of participating in the Shamanic engagement of the Winter Solstice’s natural rhythm expressed in our lives is to receive the gift of blessings. As these are made manifest in our lives, a renewed spark is awoken. This spark of consciousness is then tended into a glowing ember from which the fire of our passion may blaze forth.

The Call, the Journey, the Gifting

The people call upon the Shaman to go forth, upon their behalf, through the Realms of Darkness – that of the Longest Night, representing the Darkness of their own Souls. The Shaman is engaged to carry the burdens of the Soul – the Soul Essence – of each person and is furthermore charged with the return of a blessing for each. It is to the North Star that we, as Shamans, go. The North Star we refer to as the ‘Heart of the Eagle’, or the ‘Compassionate Heart of Purification’. Emerging from atop the Sacred Tree we come into the presence of the Star that sits above the Tree (sound familiar?). Into the heart of the Eagle we go, carrying with us the burdens of each of our peoples. Releasing the Soul Essence of each into the Compassionate Heart of Purification, each burden is purified, burned free of its turmoil. It is the release of the life force that had been locked up, constrained, within each Soul Essence that then propels us Shamans from out of the Heart of the Eagle and into the Celestial Realms, along the starry path of the Milky Way, which, Shamanically, we refer to as the Cosmic Road, or the Path of Souls.

There the Shaman receives, on behalf of each person, the gift – which shows itself as a symbol – awaiting them. The Shaman then brings this gift-symbol back to the Heart of the Eagle, where the person’s Soul Essence awaits, and sings the gift into the Soul Essence of the person for whom it is intended. Upon completion of this sojourn the Shaman then brings the newly regenerated Soul Essence back to the Earth, gifting it as a blessing to the person to whom it belongs. The Tree of Life then sparkles and shines with the light of each Spirit reawakened. The Tree is a’shimmer with lights, and the gifts at the base of the Tree, symbolizing the gifts of Spirit, are received by each clan/family member.

The ceremonies performed at the Winter Solstice are powerful in their transformative effect. They are empowering of each participant in the awakening of each to their own inherent spiritual gifts. They are ceremonies of compassion and liberation, ceremonies of blessing, well-being and abundance in the year to come.

Jade Wah’oo Grigori
~ At the approach of the Winter Solstice ~

When balance, however we may experience it – the green of the Earth, the four directions, the center of the galaxy and all that emanates from it, the progression of  the manifest as 1) Life Force; 2) Energy; 3) Power; 4) Matter –  becomes the foundation of our life, our Heart’s Desire is immediately made manifest.

This is an opportunity presented for you, the People, to participate remotely and to have Jade undergo this ceremony specifically on your behalf. During his Star Journey Jade will receive the Gift of Blessing from your own personal Spirit Star. This he will bring back as a symbol (like unto the one pictured, above) given by your star, laden with the power of its gift. Jade will then transfer the symbol’s design, and its significance, to you following the ceremony.

In this 37 minute video documentary you will witness and experience the knowledge, guidance and wisdom brought forth by Jade Wah’oo at the time of the Winter Solstice as he offers deep insights into the value and relevance of this ceremony. A time of forgiveness of debts – emotional, familial, financial and spiritual – the Winter Solstice provides the means to bring forth, in reality, the release of these burdens in this powerful ceremony. You will observe him as he prepares to enter the Shamanic state of the Little Death, and his return as Gift Bringer, to distribute the blessings of the Stars to the people.

This video is offered free. It is intended that it will assist with your participation in the Winter Solstice Star Ceremony of December 21 – January 3.